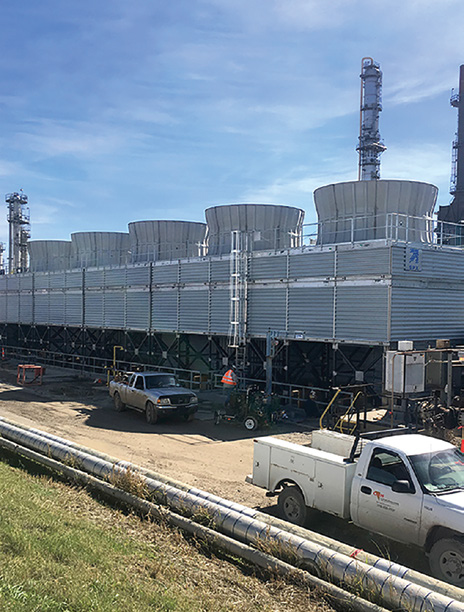 An example of new modularization technology is the Marley® NC Everest® Cooling Tower. It provides up to 50 percent more cooling capacity per cell and uses up to 35 percent less fan power per ton of cooling compared with other factory-assembled crossflow single-cell towers. The crossflow configuration offers several advantages, including easier access to the tower interior and mechanical components. It also permits “variable flow” operation, which reduces water flow rates and energy consumption during cooler weather. Its increased cooling capacity means fewer cells are required. Simpler installation reduces both construction and maintenance costs for HVAC and industrial applications alike.

Another advanced modular design is the counterflow Marley MD Everest® Cooling Tower. With a flow rate up to 12,602 gallons per minute (GPM) per cell (2862 m3/hour), it offers nearly three times more cooling capacity per cell than typical preassembled counterflow towers. At 3790 nominal tons (12,300 kW) of cooling in a single cell, it is an excellent one-to-one match for larger HVAC chiller systems. Its unmatched capacity and robust materials of construction also make it a strong contender for industrial assignments.

Modular cooling towers can be operational in just a few days, up to a week or two at most – which is about 10-20 percent of the time it takes to build a field-erected tower. Construction techniques are performed at ground level and fewer workers on-site reduce safety concerns. Modularization simplifies field assembly and operation, with fewer components to install and maintain. Modular tower componentry is built in a controlled factory environment for consistently high quality and with predictable, shorter lead times from order to product delivery. For example, the Everest series tower modules can be built in as little as six to eight weeks, which is about one-third to one-half of the lead time necessary to deliver field-erected tower components.

Additionally, on-site performance testing of field-erected towers is often required to verify they meet the specified cooling capacity. The tests, conducted by independent third-party agencies, add costs of about $25,000. Because these new modular towers are certified by the Cooling Technology Institute (CTI) to meet thermal performance as specified, additional testing costs are eliminated. 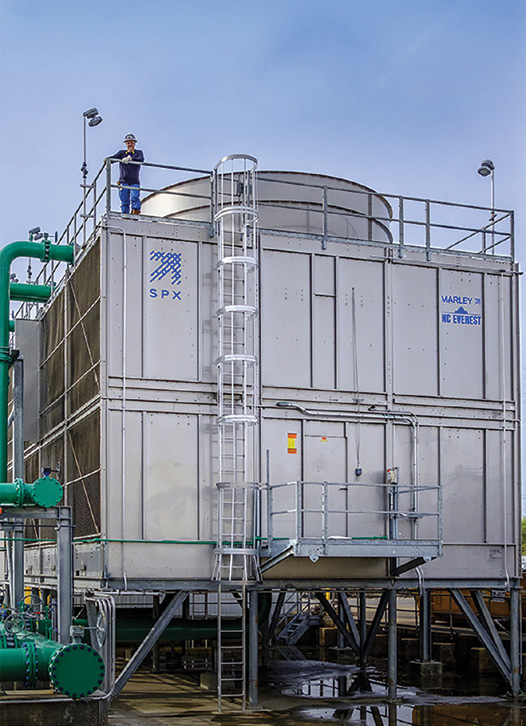 A recent construction estimate to replace a field-erected cooling tower in the southeast United States required 4,500 hours and seven weeks of field labor. By specifying the modular Marley NC Everest instead, installation duration contracted to less than two weeks – an enormous savings in time, expense and operational efficiency.

At a new data center project in upstate New York, two NC Everest tower cells providing nearly 5,000 tons of cooling were installed in one day, which was crucial to the operators who had strict security requirements and highly restricted access to the site.

In the Midwest, an oil and gas refiner needed to replace or rebuild a field-erected tower within a 19-day outage. Because it would have taken eight to 10 weeks to reconstruct the cooling tower, and longer to build from the ground up, the modular MD Everest tower was selected, allowing completion within the outage window. The customer also benefited from the smaller work crew required, which reduced logistical complexity and safety risk on-site.